One Night Stand season is almost over, but not before one final throw down on September 20th at the iconic DC10. This party also marks the 3rd birthday for the Game Over team behind the night, so is set to be a huge one with Better Lost Than stupid aka Davide Squillace, Martin Buttrich and Matthias Tanzmann, Hector, Javier Carballo and Hanfry Martinez, Tania Vulcano b2b Clive Henry, Real Gang Soundsystem, Rossko, 2Vilas and of course the Game Over residents themselves.

This unmissable party also happens to fall three years to the day since Game Over was actually born when they helped Carl Cox close down his long running Tuesday party at Space Ibiza. That was an epic night and this one will be too as all the love, energy, and friendship that has defined the season culminates in one big get together under the stars at the world’s most famous club. There have been many highlights over the summer with plenty of memorable sets from DJ Sneak, the VBX team, Carl Cox., Sonja Mooner, Enzo Siragusa and plenty more leaders in the scene.

The final forward thinking party the year is set to be a sizeable celebration, with magic in the air and headlined by a trio of tech house talents in Better Lost Than stupid aka Davide Squillace, Martin Buttrich and Matthias Tanzmann. Joining them is another White Isle hero in Hector, plus a back to back between groove maestros Javier Carballo and Hanfry Martinez. DC-10 heroes Tania Vulcano and Clive Henry have also been announced for a special b2b which will definitely take us back to those early days of DC-10 hedonistic chaos while Real Gang Soundsystem, Rossko, 2Vilas and of course the Game Over residents themselves will be on hand to deliver the goods 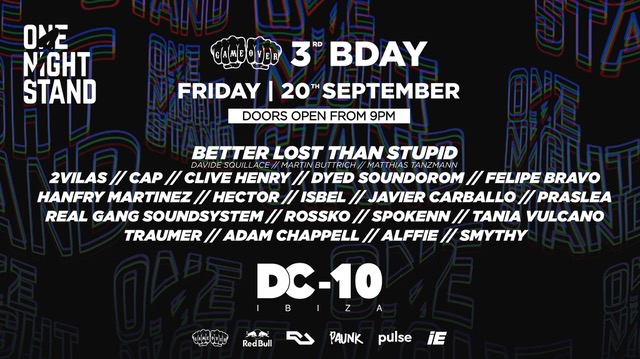 USHUAÏA ANNOUNCES ITS LINE UP FOR THE CLOSING PARTY
Dani 19 September, 2019